June 12, 2012
Done for cghub's CharacterFORGE 2d. Below is the brief provided for the challenge. 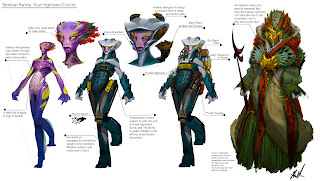 Name: O'oro'te ''She-Who-Speaks''
Race: Tarshian (Amphibious Humanoid)
Role: Grand Ambassador of the Tarshian Empire, She Who Speaks
Gender: Female
Age: Ooooooold by human standards, though Tarshians that are in excess of a thousand years old are still able to breed and perform all the duties of their younger counterparts.

Clothing / Dress: Tarshian ceremonial dress is lush, detailed, and expansive, with designs and colors that are reminiscent of their swampy home planet. Multiple layers of brightly colored fabric are typical, usually heavily brocaded and embroidered- sometimes with simple designs, other time with full tapestry depicting their ancient stories and sagas. The clothing is neccesarily huge to hide/accomodate the fact that Tarshians are forced to wear water circulation apparatuses to keep their skin cool and moist at all times when they aren't on their home planet.
Physical Characteristics
Height: 7'0
Stature: Thin, Willowy, with pronounced secondary sexual characteristics (The amphibious equal to large hips/breasts in human females.)
Hair: None
Eyes: White

Personality: Serene
Characteristics/Traits: (ENTP - Extraversion/Intuition/Thinking/Perception) The Tarshians are a majestic, ancient race of space-faring amphibian humanoids. Through careful regulation and diplomacy they have grown to become one of the most powerful races in the Galactic sector, made wildly rich by their trading know-how and the inexhaustible resources of their lush home planet. Ambassadors are elevated almost to diety-status in their culture, so O'oro'te has all of the aspects that required for her job: intelligence, erudition, serenity, and wisdom. She carries herself well, fully aware of the importance of her position.
concept art